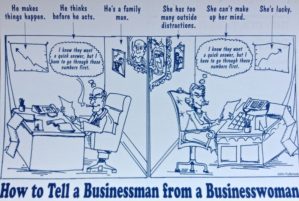 Women are underpaid, even in technology, where the notion of meritocracy is the norm. How far should the government go to level the playing field?

When someone is underpaid, it tends to persist, because each successive job will only want to pay you based on prior compensation.

Most people typically cave in to the pressure, and disclose their salary history, because progress is progress. Of course, the employer is quick to assert that they cannot disclose exact salary ranges, or where past employees were on the scale. Yet they often demand it from the employee, under the threat of walking away.

Unless and until someone can break out of that widespread practice, it will be hard for them to achieve parity.

That’s where the state of Massachusetts wants to step in. Among other things, they want to stop employers from shaking down prospective candidates for salary history information. Companies have a couple of years until this law takes effect.

An article in ComputerWorld suggests that one of the remedies should be that hiring managers fight for better salaries for incoming employees. That’s simply not realistic, with the pressures on management to continually find ways to squeeze costs.

In fact, a hands-off approach is becoming the norm especially in IT, where middlemen are the people presenting candidates. There are many more pressing concerns in the harried life of a manager than to stick their neck out beyond their established budgets.

Worse yet, thinking or hoping that someone else will fight for you is a certain path to giving away your power. Click To Tweet Women must be prepared to assert themselves, regardless of how they may be labeled.

“Empowering women and girls” is a common phrase. Concerted efforts are being made to encourage women to enter and remain in the field. Yet, it is clear that meritocracy is not enough. Those token efforts need to take root, flourish, and yield actual parity for people doing comparable work.